Be Inspired, Pop in & Browse 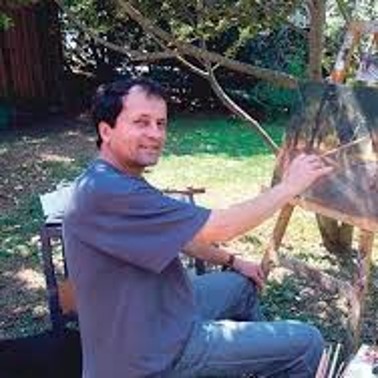 Tony has two passions in life, art and music and chooses to invest in both.  “Art satisfies me intellectually, music more emotionally. I wouldn’t shed tears over a painting but over a piece of music, certainly. What I’m doing is playing jazz with paint. Just as a jazz artist may pull together a plethora of apparently random strokes, those random strokes contribute to what the artist sees as the bigger picture”.

Tony de Freitas was born in 1950 and as far back as he can remember has always been drawing. Tony took art seriously throughout his school years and regularly won the year-end Art prize. A few years ago, he took the plunge to follow his passion for painting full time.

Tony usually works quickly, making paint sketches on board and then gets going with his palette knives. He prefers acrylics because they dry rapidly, meaning he can apply layer on layer, as is often the case in jazz music. de Freitas’ process is impromptu and he ad-libs in a very impressionistic manner. As he goes he changes and modifies, little bits creep through, the paintings evolve and the end result is never predictable. He can repeat an identical scene and it would never turn out the same. He said using a palette knife forces one to be precise yet loose and it also gives rise to the unexpected.
This is not to say that his works are not structured. He said he paints a lot out of his head. He paints predominantly landscapes, often incorporating architectural elements. He takes such traditional themes and presents them in a contemporary way by cropping or framing his subject matter in a non-traditional fashion.
Tony enjoys painting full time with no backing or funds. He started in acrylics and oils using a brush and his work had no distinguishing characteristics until a gallery owner suggested that a palette knife would better suit his impressionistic approach.
His work hangs in many prestigious galleries around the country and is well represented especially in the Cape and Transvaal. He loves to capture the effect of light on things and hopes to explore the KZN Midlands more.