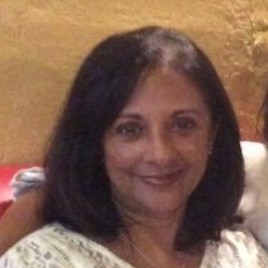 “Rani Pillay celebrates the sensuality of paint in her depiction of nudes and couples. Her concept is the act of painting.” – ( Jeff Chandler in News Art KZN; Volume 2, No5 )

Rani was initially interested in ceramic art and for twelve years explored sculpting, pottery as well as various forms of decorating ceramics under the tutelage of Heather Chorn.

In 1993, in an attempt to expand her knowledge of art Rani began exploring various mediums and techniques on her own. This included working with pencil, charcoal, pastels and water colours.

In 1994 Rani began studying painting in water colours with Ken Godfrey, who realized that she was serious about painting and hungry to learn and therefore encouraged her to move in that direction.

In the past few years Rani has become more comfortable with oils and has moved to a much bolder technique where she paints directly and undiluted, from the tube, using a palette knife. She enjoys the movement of the paint and the “impasto” finish. Human figures invariably dominate her painting as a metaphor for passion and a celebration of life.

Over the last six years Rani has participated in numerous group exhibitions. Some of them are: HUMAN RIGHTS EXHIBITION, South African Embassy, Washington DC. Touchstone Gallery, Washington DC. Several exhibitions at the NSA Gallery, Durban. Rani’s art is proudly showcased in many countries across the globe.

In 2000 “TOP BILLING” aired on national television in South Africa, presented a one-hour programme based on interviews with Rani in her home where they concentrated on her work as an Artist.