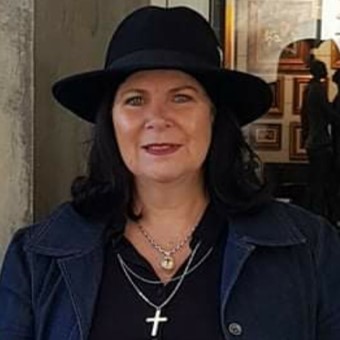 “I have accepted God’s gift of joy, to live a life filled with appreciation and contentment.”

Lee was born in Bulawayo and moved to South Africa with her family in her late teens. She married in her early 20’s however at 27 she was left a widower with two young children.

Lee is a self-taught artist and began a new hobby in art in 1992 after marrying her second husband. With dedicated discipline she replicated the masterpieces of well know masters of the arts. Her favourite mediums were oil and acrylic. After the death of her second husband Lee stopped painting for a while, however in 2008 she sold her commercial business and exchanged her briefcase with a paint palette. By June 2009 Lee had her own unique style of painting with simple topics and a contemporary style, Lee calls it a simplistic – conte

After re-marrying Lee switched from signing her art Lee Schoeman to signing her works Lee Templeton. Her medium of choice is now acrylic, using brush and palette knife techniques. Her art pieces enhance the interior of domestic and corporate walls across the globe.