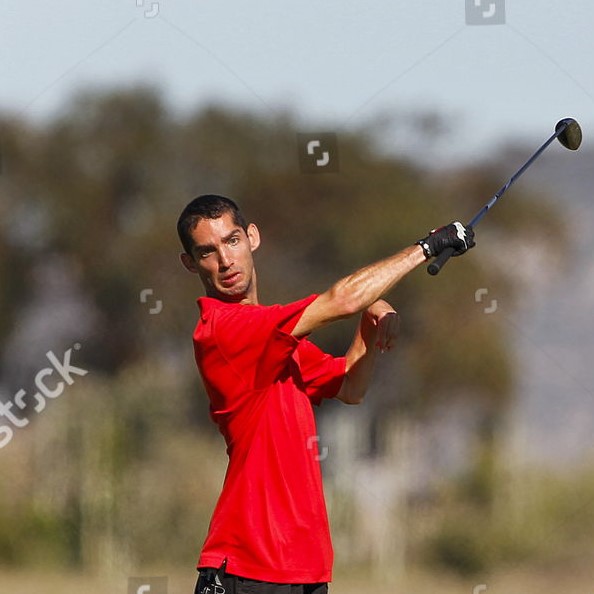 “His adversities have certainly made him a more determined person who works hard to achieve his goals. Its heart- warming to see how Emil communicates through his Art.”

Emil was born in Durban on the 30th April 1984 and suffers from Spastic Cerebral Palsy. Being unable to speak & not having full control of his body has not held Emil back and he has endeavoured to live life to its fullest. Having no control of the right side of his body, Emil has learnt to walk, however due to the spasticity of his facial muscles he is unable to speak. Emil is not deaf but uses sign language and a program called Proloquo2Go to communicate.

Emil is a very sociable young guy and is known for his great big smile. He has always shown an interest in sport and especially golf. With determination he has learnt to play the sport surprisingly well and you will often find him practising at the Mt Edgecombe driving range. In the recent past Emil has been the Ambassador for SADGA, which has been a big boost for Emil’s self-confidence.

Whilst still at school, Emil showed a keen interest in art, thus after leaving school his parents enrolled him with the well-known and talented Durban artist Thelma Buzzard with whom Emil attended art lessons for over 15 years, until she stopped given lessons in 2020. His passion and enthusiasm for art still grow and flow through in his water-colours that he paints. In 2010 two paintings of Collioure were sent to friends who lived in the village. After making their choice of which one to keep, they asked the local gallery to try and sell the other painting. The painting was sold within days. In the same year one of his paintings was chosen to be part of the 2011 calendar produced by the Institute of Disability at the University of New Hampshire, USA.

With initiatives like art auctions by SADGA and assistance from friends, Emil’s works hang proudly across the globe. You will often find Emil golfing on the Mt Edgecombe courses or sitting under a tree expressing his thoughts with his amazing water-colours.